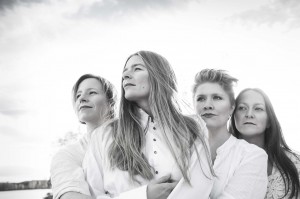 In 2012 Bölja, Hallberg, Härdelin, Ståbi was awarded research funds for a project titled ‘Death in Song’. They have gone through historic music archives in search of new material for the project, and in 2014 they took it on stage. The result was While Waiting.

Järvsö fiddler Jonas Olsson brought these four singers of the Hälsingland tradition together in 2004, for a recording. This was the start of a fruitful collaboration, resulting in the CD Kärleksbrev och ryska satelliter – Visor från Hälsingland (Love letters and Russian satellites – Songs from Hälsingland). The CD received critical acclaim and was nominated at the Swedish Grammy Awards for best folk music album.

“Four personalities, four voices, four stylistic expressions and yet a pleasing whole. These women are not only entertainers and artists, they also carry a deep knowledge of the folkmusic traditions of Hälsingland.” – László Gönczi, Ljusdalsposten