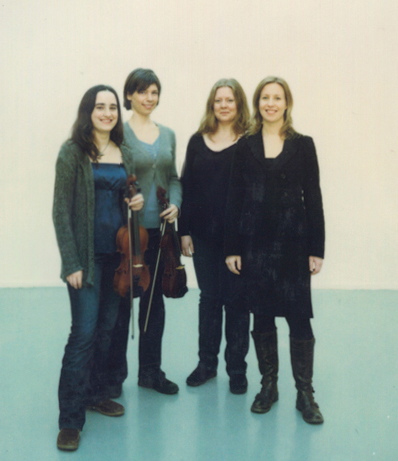 The Swedish provinces of Hälsingland and Bohuslän, England’s Northumberland and Welsh Gower are all represented in the backgrounds of the members and the repertoire of the group. The four voices make for a stark contrast between the raw lure of a unison melody and a complex weave of four intertwining parts. Melodies are stories. Words are rhythm.

Ditt Ditt Darium played together for the first time in 2003 and have since toured the US and Sweden and appeared on both American and Swedish radio and TV. In November 2007 they released their debut album, Ifrån främmande land (From a land afar). The simple line-up has proved very versatile and the repertoire spans from polkas to drinking songs, from swinging to lyrical. For a long time Ditt Ditt Darium has had a particular love of songs connected to coasts and seas: Music that travels. Music for travelling.

Ditt Ditt Darium has taken a break from touring while its members have spread across Sweden and even the U.S. and started families. But there are plans for a revival!

The album Ifrån främmande land featured in the BBC Radio 3 Late Junction favorites of 2007. The album is also included in the 2007 favorites list for Swedish releases, all genres, in the Swedish newspaper ‘Östran’.

“…delicate, minimalist and on target” – from Folkmusik and Dans magazine (translated from Swedish)