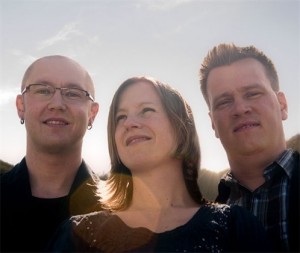 Kapten Bölja is a band playing traditional music with a focus on singing and storytelling. The group consists of three renowned musicians: Johanna Bölja Hertzberg – vocals; Tomas Lindberg – guitar, bouzoki; Ola Hertzberg – keyed fiddles. Kapten Bölja has a special love of medieval ballads with beautiful melodies, groovy polskas and songs from the turn of the 20th century. This is expansive music in a small setting.

Ola Hertzberg play keyed fiddle in critically acclaimed Outhouse Allstars and Tomas “Limpan” Lindberg is heard in groups like Drapuner and Fomp. Kapten Bölja released their first CD in the summer of 2007 but soon took a break from performing while tending to young ones. During 2013 Kapten Bölja is planning a comeback to the stage! After the intense period of parenting young children there is again time make new music and revive these tunes.

“Many ballads in fanciful arrangements. I like Johannas voice – it is warm, pure and direct”